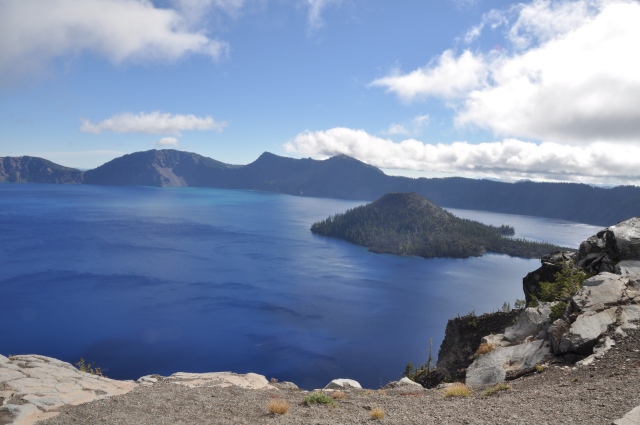 On our most recent travels we were fortunate enough to visit Crater Lake National Park – I wish I could convey the absolute drama and total body experience of my first view of Crater Lake. We got out of the car at the parking lot just down from the Rim and quite suddenly realized it was cold – really cold. We had been travelling up in elevation since entering the boundaries of the National Park, but we had no idea the temperature had dropped as much as it had. The chilling cold was accompanied by a stiff, icy wind.

We immediately bundled up and began a quick hike up the slope to the rim of the caldron. This walk is actually a trek up the flank of a transformed volcano. Gazing over the edge at the incredible blue water of the lake made me gasp – a breathtaking sight, the extreme cold, and a wind that seemed strong enough to blow us right over the edge, all had their effect. Photos can’t do justice to the experience, but what can I say? We just keep trying. 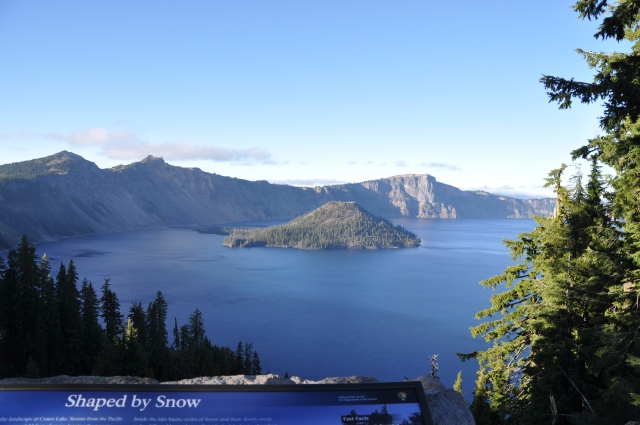 How did a mountain become a lake? Good question. Well – it wasn’t from a meteor crash. A massive volcanic eruption almost 8000 years ago created this deep basin where the mountain peak once stood. For centuries rain and snow filled the basin. The result was the deep blue lake you see here – its colour and clarity unmatched.

Carter Lake is six miles across, 2000 feet deep, and it holds almost 5 trillion gallons of water. The tallest point on the rim is 2000 feet above the lake.

Why so blue? The water of Crater Lake appears so blue because other colours of the light spectrum are absorbed. The blue wavelengths are scattered and absorbed by the human eye. Why so clear? The clarity of the water is due to the fact that only rain and snow fall within the crater – no river sediment ever reaches the lake to cloud the water. Crater Lake’s purity makes it a pristine benchmark for change as it acts as an indicator of the impacts of air pollution, climate change, and invasive species.

The oral myths of the local native tribes describe a cataclysmic eruption. These stories parallel the geological record of the area. After the eruption the area became a prominent ritual site for the native people – the volcanic terrain was seen as a place of power and is still used today for vision quests and ceremonies. 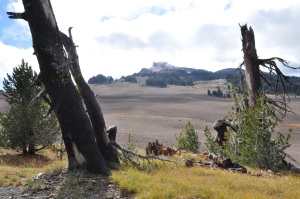 On the drive up to Crater Lake, we passed through a terrain both stark and beautiful. The area is home to the white-bark pine – its gnarled and twisted branches forming themselves into breathtaking shapes – almost like sculpture. These trees are able to survive at the highest elevation, able to withstand extremes of temperatures and high winds. 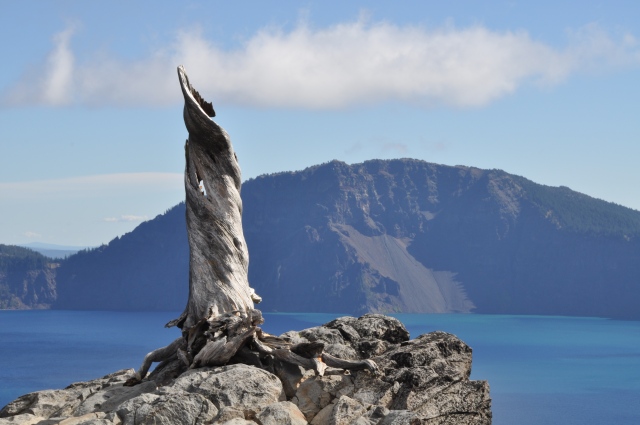 Phantom Ship was one of the sights along the rim drive that we didn’t want to miss. 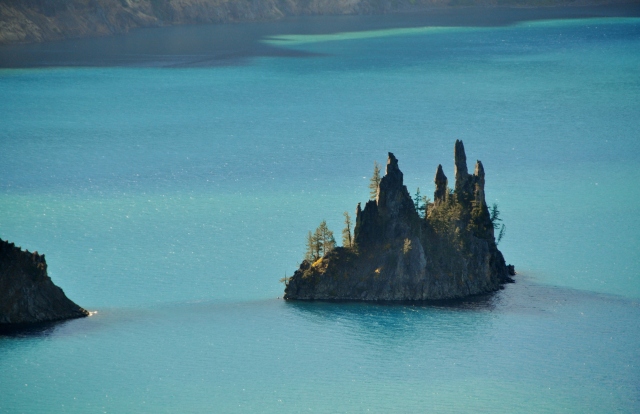 So there you have it – Crater Lake National Park in southern Oregon. And here’s an odd bit of synchronicity – when I began writing Disappearing in Plain Sight, I named the lake that figures prominently in the story – Crater Lake. I had no idea at that time that there was a real Crater Lake or that it was so breathtakingly beautiful. Life can be strange. If you ever get a chance to visit this gorgeous lake, you won’t be disappointed. We sure weren’t.