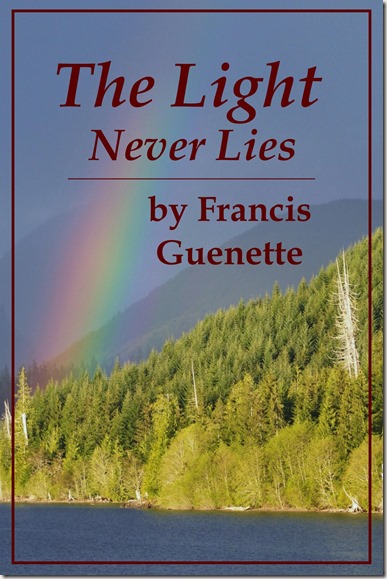 The learning curve has been negotiated and the hard work has paid off. We recently purchased a program called BookCoverPro (deluxe edition) with the idea that husband Bruce was going to take over cover design for all my future forays into the world of book publishing and we can hopefully spread the cost over several covers. Like any good wife, I went into the process sounding enthusiastic while internally filled with doubts. Obviously, the guy is a skilled photographer and has a great deal of patience for tinkering with things but did that make him a book cover designer? I wasn’t sure.

My doubts have been shelved and I’m thrilled to reveal the ebook and softcover for The Light Never Lies and a bit about the process of creation. Keep in mind though, this is not a primer on how to use BookCoverPro – that is way beyond my powers to understand or explain. My part of the process was to look at innumerable drafts and say no, no, no, sometimes, maybe and ultimately, yes, yes, yes.

I knew from the beginning that I wanted the picture of the lake with the prominent image of the rainbow and I wanted something that wouldn’t clash with the cover of Disappearing in Plain Sight. After that everything was up for grabs. Bruce played around with various filters to get the right look. He then chose a dark burgundy for the print to compliment the greens and blues of the photo. The burgundy box around the entire cover came later to define and delineate. The bar code generator located in the program accepted my newly-obtained-from-the-Canadian-government-site ISBN number without a hitch. I’m particularly thrilled with the little Huckleberry Haven Publishing icon on the spine, designed for me by my son who is also involved in doing a specialized proof-read of the book and is my go-to person for any questions related to formatting. This is really becoming a family affair project!

And speaking of formatting – I am working at putting the book, bit by bit, into the CreateSpace Formatted Template that one can download from the CreateSpace site. I had considered purchasing one of the formatted templates that Joel Friedlander sells over on The Book Designer site and it still may come to that if I’m not happy with this free one.

But whether the template comes from Joel or CreateSpace, I’m here to tell you that working with a pre-formatted template is as close as I want to get to the lower regions of hell. Suffice to say – don’t attempt to move text around too much because the preformatting is bound to send up a howl of protest and simply not allow anything that violates impossible to understand and deeply hidden norms.

I’ve found a neat little text ornament (book design language) that I hope works for my chapter breaks. These are also known as glyphs or dingbats.

So far, for the print edition, I’m looking at 8 pages (4 recto and verso – more book design language) of front matter and six of back matter. For the front, I have what is referred to as the half-title and on the back of this page – other books by Francis Guenette. Albeit a short list but still, nice to see. Next, the actual title page with the copyright on the reverse, then the dedication with a blank reverse and finally, the first section title page (Convergence) with a blank reverse. After all of that – yippee – Chapter One.

On other publishing fronts, I’m up to my ears trying to finalize the back of the book synopsis – another specialized form of hell for someone as long-winded as me.

So – there you have it. The publication of The Light Never Lies is moving forward and so far no more pain that I experienced when working with the assisted self-publisher for Disappearing in Plain Sight – though again it is early days.