And it doesn’t seem to get any easier with practice! I’m at it for the fourth time and I feel as though it would be easier to write another book than it is to construct this short synopsis. Struggle, struggle, struggle.

I found a handy-dandy resource this morning over on Books Go Social Book Marketing Blog.

Using my current draft of Maelstrom’s blurb, here’s my take on a few of the steps.

A strong first sentence. This makes a lot of sense. Hook the reader right from the start.

A shot is fired into the still night air and a young woman dies up on Suicide Ridge.

Highlight the drama. Let the reader know what kind of book to expect.

A dangerous game of move and countermove has begun. The year is 1976, the setting, small town America. Over the course of one blistering week in late August burning winds of change sweep through Haddon Valley and no one’s life will ever be the same.

Name the characters and broadly sketch their circumstances.

Sheriff Bert Calder, with the help of Mayor Amos Thatcher, has held the isolated town of Haddon under his thumb for twenty-five years.

The sprawling estate of Casa Destino sits on the hill overlooking the town. Rafael Destino races against time to gain control of the all-important Haddon Valley Railroad. His goal – to destroy Amos Thatcher, the man he believes responsible for the death of his beloved sister. 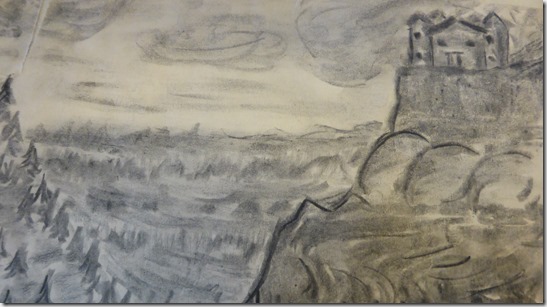 Myhetta, commonly known by the petty citizens of Haddon as the breed, is charged with carrying out Rafael’s revenge. But how far will his adoptive father push the young man who owes him everything?

Laura Thatcher has prided herself on being a person who makes do in a loveless marriage. She sleeps in the spare room and lavishes all her affection on her step-son Casey. Her quiet life explodes when Myhetta pulls her into the Destino’s blood feud against her husband.

Meanwhile, Calder lays his plans to regain control of Myhetta’s mother, Ahya, a woman who escaped his grip so many years before.

If the book is meant to be dramatic then play that up. Don’t be afraid of a little hype.

Maelstrom is a pot boiler of a reading experience. The dialogue sizzles, the characters jump off the pages and the story races along like a runaway train.

Well, there you have it. It’s back to the drawing board. I have my work cut out for me.

Except for the top photo, I’ve used examples of my mother and grandmother’s drawing to illustrate this post. Hopefully some of these images will make their way to the cover of Maelstrom. But that is still very much in the planning stage.

16 comments on “Writing a Book Blurb is Hard Work”