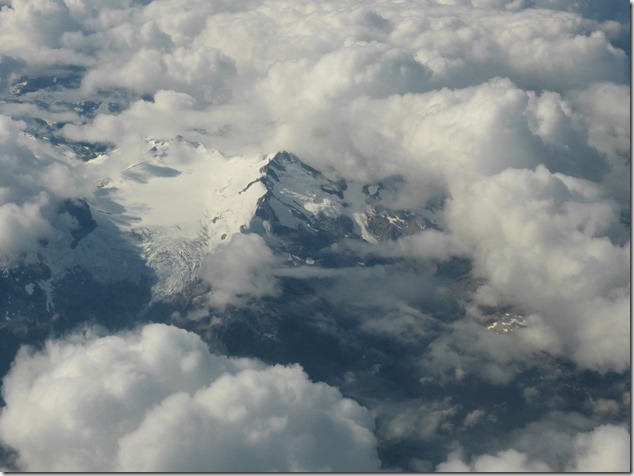 I can tell you the type of traveller I’d like to be. Get up and go with a moment’s notice. Work until the moment I have to leave. Be an organized, unflappable veteran of airport security. Squeeze every drop of life out of a trip and make it all fodder for the creative mill. Return home, get those bags unpacked and be back into the swing of things in no time flat.

Alas, I am far from my dreams. I am the person who sees the departure date looming a couple of weeks ahead and decides there isn’t much point sinking into a project because I’ll just have to pull up short to hit the road. What’s the point of that? I am as far from spontaneous as one can get. Those we know me, know better than to try surprise tactics. I can only hope I don’t look as frazzled standing in airport security as I feel. And it generally takes me a week to ten days to resettle when returning from a trip. I’m like an old dog circling the mat of my life over and over until I’m able to settle back into any type of routine.

Where I find success is in squeezing every drop of detail out of my experiences. For a writer, this makes the disruption of travelling well worth the effort. I’m good at taking note of details – the look of a prairie sky, the eerie feeling of an empty school yard and a long row of swings totally still in the afternoon heat, the noise a helicopter makes when it lands, what a magpie looks like, two men in conversation at a Tim Horton’s, one rubbing his jaw and saying, “Now, that, what you’re talking about right there … that’ll kill you sure as sure.”

I love to study people. On my recent trip, a woman at the airport caught me eye.

Short, sculpted, blonde hair, a chiselled jawline and a face dominated by a large mouth and gleaming teeth. I have no idea why but I can’t stop staring at her. She stands ramrod straight – her posture is admirable to the slouches among us. She’s dressed impeccably – heels, black slacks and a clinging, patterned top, the type that has an off-set neckline. The strange lack of symmetry in that throws me off somehow. She reaches casually into her black leather, designer purse and withdraws a small object. It turns out to be a miniature measuring tape. It snakes down to the ground as she goes about measuring the height and width of her carry-on bag. Maybe I don’t travel enough – I’ve never seen anyone do such a thing. I’ve watched people eye their bag up with nervous glances to and from the metal contraption near the gate that defines exactly the size of a carry-on bag. I’ve seen people trying to stick an oversize bag into said contraption, insisting it will fit. I’ve stared with disbelief while a person went so far as to tip the whole contraption over in her desperate efforts. But I’ve never seen anyone actually measure their carry-on bag. The action seems so natural to this woman, so effortless. The tape snaps back in on itself and is tucked away. I stare at her purse and imagine it containing dozens of useful items all stored in well-organized pockets. She can put her fingers on anything she might need. This woman is unflappable, I can’t imagine a scenario that could ruffle her.

And then the writer in me starts imagining …

You put that woman with this helicopter and throw in those swings … those kinds of juxtapositions are bound to make a story.

What sort of a traveller are you?

10 comments on “What Type of Traveller Are You?”