When watching kids play sports, the best moments for a grandparent don’t necessarily match what parents are there to see. Don’t get me wrong, my heart sped up when Emma caught the ball and looked up with the most incredulous expression on her face. But the photos Grandma wants to capture are more in the category of joy-in-the-moment rather than sports hall of fame. 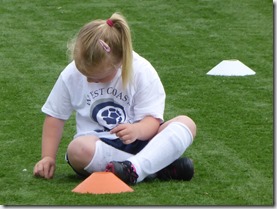 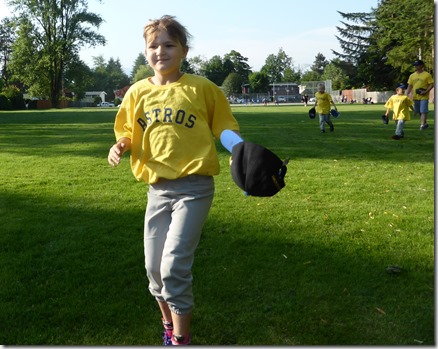 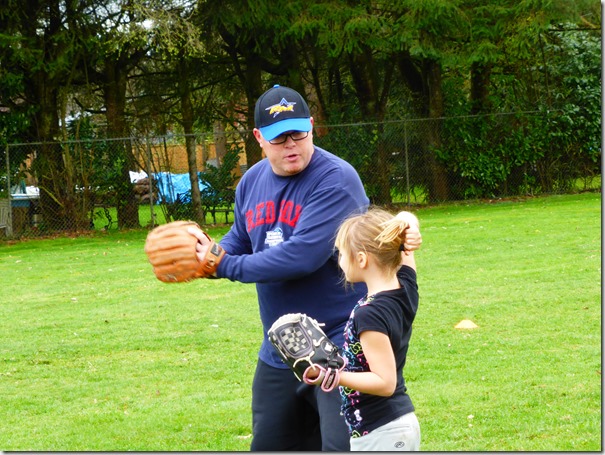 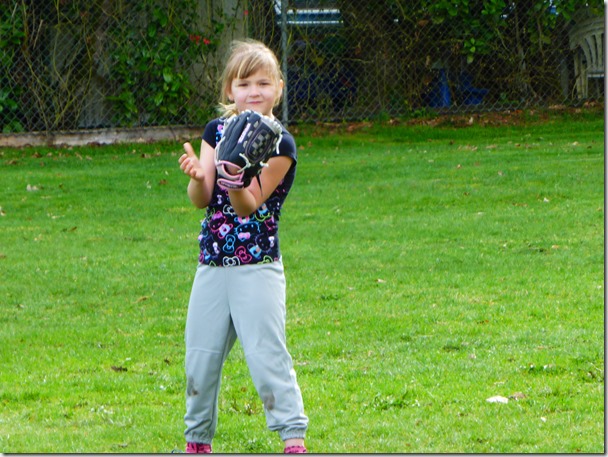 The value of courage, my 200th post, the last day of 2013, baseball and a little taste from my upcoming novel – I have an eclectic mix of thoughts to share today.

When my kids were little, we had a set of books entitled, The Value Tales. These books featured people whose achievements fit the criteria of many important values – Believing in Yourself: Louis Pasteur, Helping: Harriet Tubman, Determination: Helen Keller, Kindness: Elizabeth Fry, Giving: Beethoven and many others. The book that was requested the most in our home was, The Value of Courage – The Story of Jackie Robinson.

Over the holidays, my husband Bruce and I had the opportunity to watch the movie “42” – The Jackie Robinson story. For the baseball lover, “42” is right up there with, The Natural and Field of Dreams.

That children’s book from long ago came to life for me as Branch Rickey, the Methodist, curmudgeon-like baseball executive (played brilliantly by Harrison Ford) devised a plan to break the colour barrier in Major League baseball by signing Jackie Robinson to play for the Brooklyn Dodgers. Robinson’s courage in the face of rampant racism is vividly displayed in his ability to turn the other cheek. He holds his anger in check, refusing to retaliate in kind. This is grace under pressure at its finest.

At more than one dramatic point in the movie, Robinson asks Rickey why he’s so relentless in his plan to open the Major League to coloured players. The last time he asks this question, Robinson presses for more than a pat answer related to profit margins. Rickey shares his desire to return baseball to a pristine and idyllic state – the perfect thing it should always be.

The subject of baseball comes up in my debut novel, Disappearing in Plain Sight and its soon to be published sequel, The Light Never Lies. In the sequel, the characters discuss W.B. Kinsella’s novel, Shoeless Joe and how the game of baseball is a metaphor for life – a form of perfection to be strived for, not only on the field of dreams but also in the course of the day-to-day.

“Baseball is the most perfect of games, solid, true, pure and precious as diamonds. If only life were so simple . . .” (W.B Kinsella – Shoeless Joe)

In the following scenes from, The Light Never Lies, Beulah has been convinced to help coach a team of kids and the Crater Lake Timber Wolves have been revived to play an exhibition game against Beulah’s team.

“Liam tells me you have some enthusiasm for baseball. I’ve got a proposition for you.”

Beulah leaned back against the solid weight of the bakery’s long wooden table and folded her arms across her white-aproned chest. She nodded at Alex to continue.

“There’s this bunch of kids from the reserve over at Cedar Falls. They’d like to go to a baseball tournament down in Courtenay on the August long weekend. I’m looking for a coach.”

“Let’s say they are long on enthusiasm and short on skills.”

Robbie changed the subject, “I’ll tell you what I think about that Trickster ball team. Those kids don’t know jack shit about baseball and they aren’t getting better, even though this is their fourth practice.”

Alex pointed his can of Coke at Robbie, “Watch your language; what the hell will people think . . . a kid your age talking like that.”

Beulah laughed, “I hear you, Robbie. We’re still a long, long way from moulding that crowd into any kind of team. I’ll tell you this, though – we might just be at the end of the beginning.” Beulah narrowed her eyes thoughtfully, her attention caught for a moment by the boats in the harbour. The riggings made a steady thwacking sound as they flapped in the wind that swooped over the breakwater and tossed the tops of the masts to and fro.

She remembered her first sight of the kids as they stumbled off the bus – black and grey hoodies pulled tight around scowling faces, a couple of the guys wearing leather jackets and stomping boots, one girl dressed like maybe she thought she would be trying out for a Much Music video. The sneering, adolescent attitude had not fooled Beulah. It didn’t begin to hide the aching need the kids had to be part of something none of them could even name. Alex was right about that – helping a kid find out what that something could be, was a project worth taking on.

She was brought out of her reverie when Alex hopped up from the bench. He eyed Beulah with a knowing look, “You are a woman who enjoys a challenge. I could tell that from the first day we met.”

Beulah ran over to the Tricksters dugout. She snapped at Alex, “You’re supposed to be giving these kids a pep talk . . . you could hear a pin drop in here.” Beulah pulled the kids into a huddle and got them raising their heads and cawing loudly. She stood back and studied her team. Alex had gotten the band to spring for uniforms, black with white trim. She hoped they wouldn’t be mistaken for magpies.

Beulah turned to see several members of the Timber Wolves glaring at her. She whacked hands with a few kids and ran back to the other side of the field.

Jillian walked out from the backstop fence where she had been chatting with Roland and stood behind the plate. She shouted, “Play ball,” and the game began.

Beulah kept Robbie busy running back and forth with messages for Alex about what he should be doing to coach her team. At one point, she was seen urging one of the Trickster players to head for home. The Timber Wolves howled for real when that happened but Beulah just laughed at them. At the end of the fifth inning, with the Tricksters down by two runs, she announced, “That’s that. I’m jumping ship.” She trotted off to the sound of loud boos from one side and rousing cheers from the other.

So there you have it – my 200th post and the last post of the year 2013. It seems auspicious to talk about courage. Challenges are always just around the corner. Grace under pressure is most often required. But life is a bit like baseball isn’t it? I’ll let Caleb have the last word with another sneak peek from, The Light Never Lies.

Beulah narrowed her eyes at Liam and frowned, “Are you going to sit there and make me give myself a good, stiff kick in the butt? You’re a great friend, you are.”

“Tell me what Caleb would have said. You saw a side of him that I never did.”

Beulah snorted, “Ya, a drinking side.” She was thoughtful as she answered, “Caleb would have said . . . What we have here, Beulah, best case scenario, is a temporary setback; worst case, a game changer. But there are still a few innings to play. Life is like a game of baseball. You never know when a grand slam is going to change the whole damn outcome. Then he’d have offered me that lucky watch.” She nodded her head towards the watch on Liam’s wrist.

Happy New Year from Fran – the day is bright and sunny on the West Coast of BC. Hope you have a safe and happy New Year’s Eve and best wishes for 2014.