Bill Feader Jr. and Senior – manager/owner of FP Foods in Port Alice, BC pose for a photo shoot with Disappearing in Plain Sight.

Going into my self-publishing adventure, I imagined sales would come from people ordering my book from Amazon or Chapters. To be honest, I thought mostly of e-book sales. I knew I was going to get some trade paperback copies of my book as part of my publishing package, but I certainly never considered buying boxes of my book and acting as a vendor to sell them.

All of that changed when I received those copies and it was mostly due to my husband, Bruce – salesperson extraordinaire. He started to sell those books every time he went out the door. Before I knew it, we needed to order more and then even more. At first, the sales were to people Bruce ran into in the regular course of his day. Then I got on board with some author appearances and events. Now, sales are happening right in our local community grocery story.

Bruce approached manager Bill Faeder Jr. of FP Foods in Port Alice to ask if he would carry Disappearing in Plain Sight. Bill was open to the idea. He wanted to start off small, taking a few books at a time and seeing how it went. After the sixth invoice, he has decided to take a bigger order.

In book marketing, creating a buzz is the key to sales. I think that’s what has happened in Port Alice for Disappearing in Plain Sight. And many thanks go out to the people who work at FP Foods. I know that a few of them have read my book and are quite willing to promote it to others.

Don’t ignore sales of real books in your local market. Every day I hear stories of self-published authors who have sold what is a fantasy-like number (to me anyways) of e-books, making it to the top of Amazon lists, burrowing deep into Amazon’s mysterious and massive marketing machine and telling others how they can do the same. I give e-sales my best effort and don’t get me wrong – I value every single reader – no matter how they get hold of my book. But, I must say, there is something to be said for local community support. These are the people I see when I get my mail or buy my groceries or sit in the doctor’s office. It’s hard to find the words to express what those readers mean to me. (And that’s not an easy admission for a writer!)

A friend told me he was talking to someone in town the other day who informed him, “We even have our own local author now.” And that was me! Wow.

On September 12th, I’ll be attending a book club at the Port Alice Library to discuss Disappearing in Plain Sight. I’m looking forward to this event because it will be assumed people have read the book and no one will have to worry about spoiler alerts. I’ve been coming up with a few discussion questions in case of a lag in the conversation. Is there a question about Disappearing in Plain Sight that you would like me to include? Let me know.

On another topic, I was reminded of Lily Tomlin’s words this morning. “The road to success is always under construction.” First thing this morning, I checked out the Kindle Book Review’s 2013 Best Indie Book Award site because today the five finalists in each category were to be named. Disappearing in Plain Sight didn’t make the cut in literary fiction. (Cue sound effects: wailing and gnashing of teeth.) Oh well – many congratulations to all the finalists. Do go to the link above and check them out

Meanwhile, I’ll be back to Tomlin’s construction site to finish The Light Never Lies and enter it in next year’s competition. But first, I have to get out and pick those green beans. 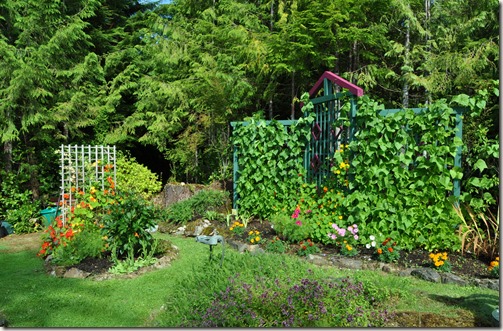 Just glad the beans are out the back. I wouldn’t want to step out the kitchen door and fight this guy for the apples.

Yesterday, I partnered up with my wonderfully extroverted friend, Marion, at the mall in the nearby community of Port Hardy. We rented adjacent tables, and she sold her beautiful, handcrafted scarfs and hats, and I sold my book.

What an experience. I wish you could meet Marion. She knows everyone there is to know

in Port Hardy. She called people over to the table and introduced, “her writer friend, Fran.” She told everyone she was reading the book, and it was fantastic. People she regularly has coffee with at a local diner, gathered around to talk and even buy a book.

I heard all about a new phenomenon in Port Hardy – wind mill guys (but there are also gals). A large wind farm is being installed on Knob Hill, near Cape Scott on the Northern tip of Vancouver Island. The project employs a lot of people from far and wide. Marion’s friend pointed a few of them out to me as they cruised through the mall on their way to the local grocery store. She nodded knowingly and said, “Wind mill guys”. She told of a fellow who showed up at the local Legion’s turkey dinner wearing a pair of $3000.00 shoes. She gave another sage nod. “A wind mill guy.”

My writer’s imagination went wild with thoughts of a book about what happens to a small community when an influx of wind mill guys blow into town.

I chatted with a woman who is writing her own book with surprisingly similar themes. Thank the stars I have read widely because I was able to talk knowledgeably about various books people mentioned that they were currently reading. I had a chance to catch up with a woman I have known forever. She was in the mall with her oldest daughter and two adorable grandchildren. She bought a book and then her daughter bought one, as well.

People stopped and talked about health concerns, the local council, and the previous night’s very wild and crazy event at a local pub that featured a Newfoundland band.

I also heard a captivating story about some guys someone had once met who had been hauling a load of bathtubs across the prairies. They had some engine trouble and ended up stranded in a small town waiting for a part. One thing led to the other, and they were still there three days later. There was a heat wave going on, and a local blues festival had the camp grounds overloaded. The enterprising men had unloaded the bathtubs and set them up in a row by the river. They were filling them up and selling baths. According to the storyteller, people had lined up around the bend, dropping their towels by the open-air tubs and hopping right in. Only on the Canadians prairies, you might well conclude that. Once again my imagination was working overtime thinking about how I could work that story into a book sometime.

For my first public appearance to promote and sell my book, it went exceptionally well. I was 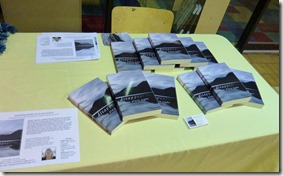 thrilled with the way the book looked, copies of it stacked on the table. I enjoyed talking about the fact that I had written a novel and what it was about. I loved watching and interacting with “the locals” – remembering that I am a North Islander, too. It was delightful to ask people, “Did you want me to sign your copy?” And having them respond, “Of course.”

One comment about my photos for the event – I brought my camera with every intention of getting all kinds of terrific candid shots. I only took two pictures, and those were when we were setting up. If you want pictures of any event, don’t imagine you will have the time to take them yourself. Make sure you assign the task of taking photos to someone else. Lesson learned and noted.

Thank you, Marion and thank you Port Hardy for a great day! 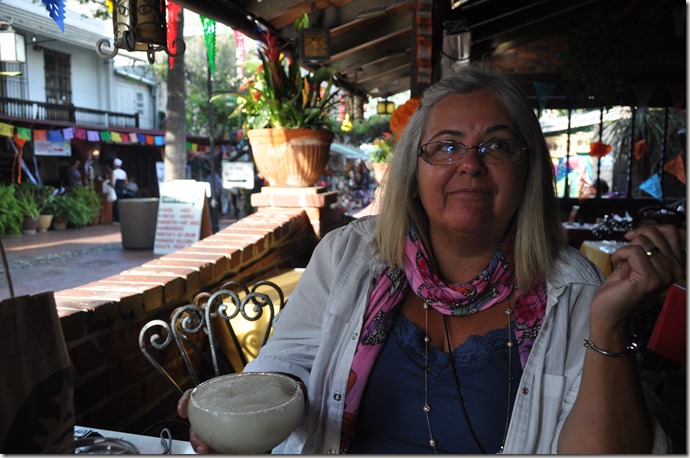 (Photo of me on Olvera Street in downtown Los Angeles, enjoying the best ever Margarita. I felt this happy last night. I offer up a toast to everyone who made me first book outing so great.)