(My personal favourite – Muskoxen – an offering from the Northwest Territories. I could almost feel his grassy hair blowing in the breeze.)

MosiaCanada, a signature event of Canada’s 150 celebrations in the Ottawa/Gatineau area, was our countries biggest horticultural event.

Lise Cormier, head of Mosaicultures Internationales of Montreal, instrumental in bringing this event to life, says, “Canada is space and this is really a place for imagination.” So true! 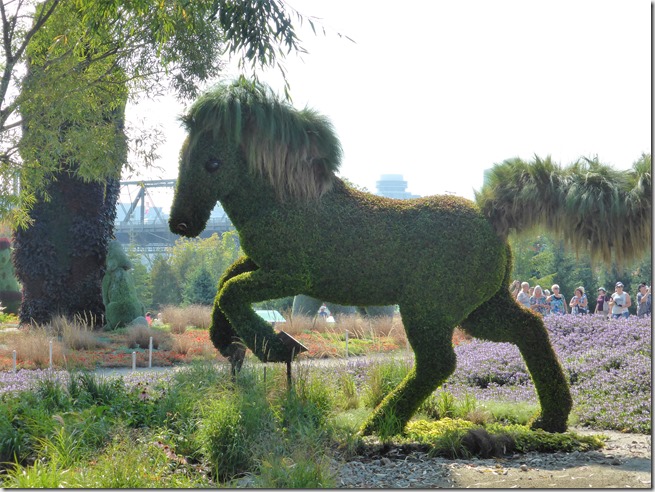 I had the great pleasure to visit this installation, a tribute to our country’s history and its founding peoples, in late September when the temperature soared to the mid-30’s -uncharacteristic for that time of year. 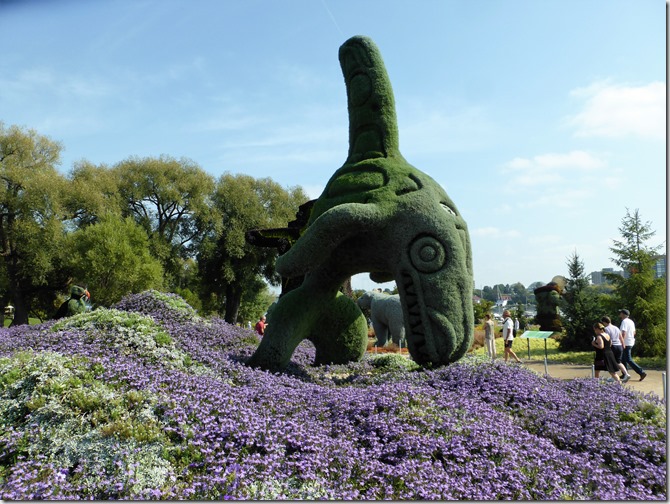 My son, Doug, and I strolled over the bridge from downtown Ottawa to Jacques-Cartier park in Gatineau, with incredible views of Canada’s Parliament Buildings the whole way.

Once in the park, we marvelled at the incredible pieces of mosiculture artwork arrayed around a winding one-kilometre path through the park. Though I felt somewhat wilted due to the heat, the plants were fresh and trimmed to exquisite form with a multiple of gardeners snipping away in the shadows. 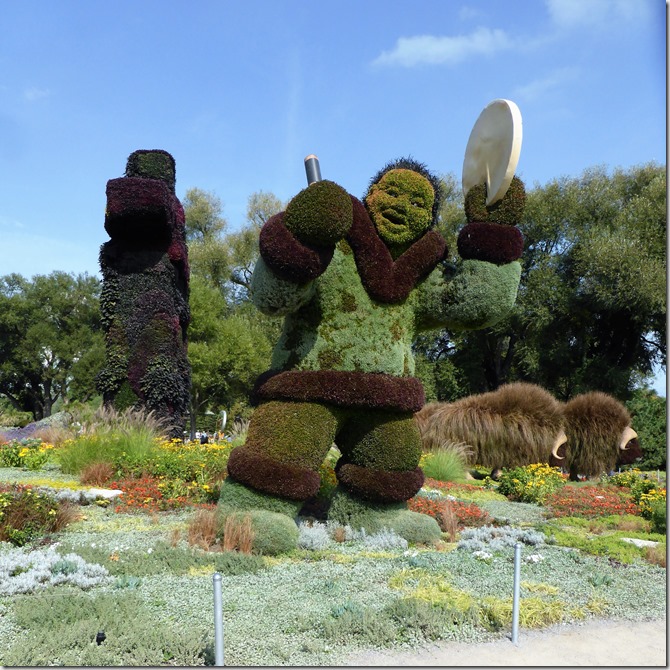 (Another favourite – The Drum Dancer – Nunavat)

The pieces combined three different art expressions – sculpture for the structure, a palette of colour and horticulture as the medium to create a living, ever changing form. Each piece consisted entirely of annual plants, most chosen for colourful, season-long foliage instead of flowers, grown in soil sandwiched between layers of a geotextile supported by metal frames and watered by internal irrigation systems. 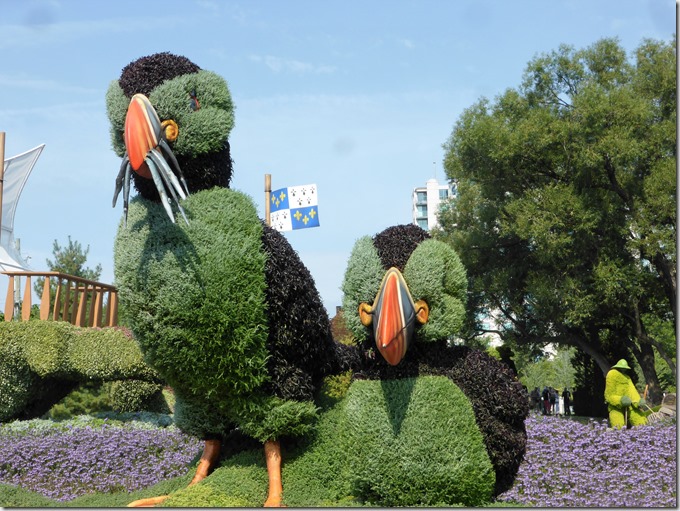 (The Puffins – Newfoundland and Labrador)

Ahead of the June 30th opening, almost 100 gardeners – some from the Chinese cities of Shanghai and Beijing, which sent pieces to celebrate Canada’s birthday – were at work installing what would total over three million plants of 80 different varieties.

A horticulture friendship between Canada with Shanghai and Beijing led to coloured works of art that delighted the eye. 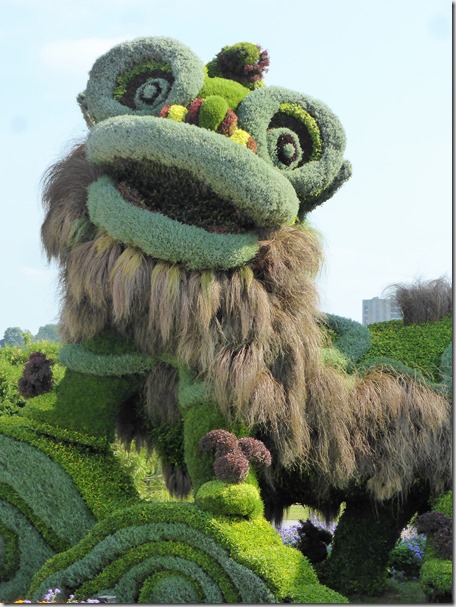 The biggest sculpture was a 15-metre tour-de-force – Mother Earth: The Legend of Aataentsic.

Mother Earth sits in contemplation with her gentle face of silvery grey santolina and long hair of tumbling sweet potato vine and purple petunias. Water pours from her car-sized palm, where a bird alights to drink, into a shimmering pool below. 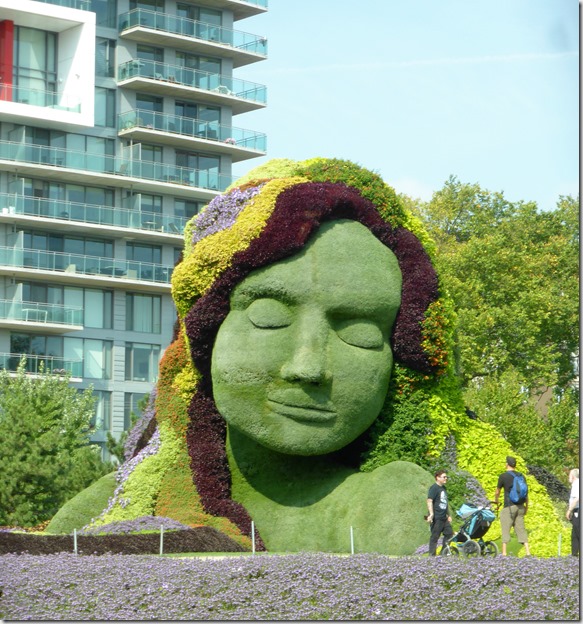 MosiaCanada 150 closed on Oct. 15th after more than 1.3 million visitors took in the sheer delight of living mosiculture. I am so happy to count myself among those who wandered in wonder. 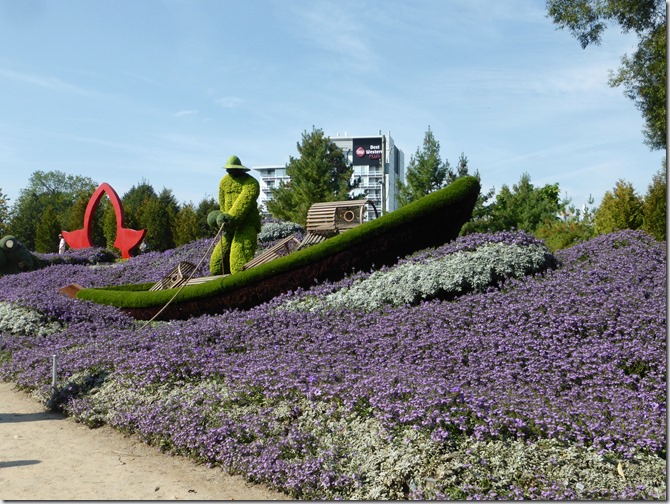 I had the treat of spending a few hours over the past long-weekend visiting the Bar U Ranch which is not far from High River, Alberta. My daughter, Kristen, and I had a great time listening to the Parks Canada guides, wending our way through the 100-year-old buildings and simply enjoying a pleasant day of mid-20-degree temperatures under a gorgeous blue prairie sky.

The Bar U Ranch highlights a work culture celebrated nowhere else in Canada – cattle ranching and the changing role of the cowboy over time. The seven decades of history represented at the Bar U follows the progression of ranching from the time of the open range, through the early days of fencing in the prairie and on into the age of mechanization. 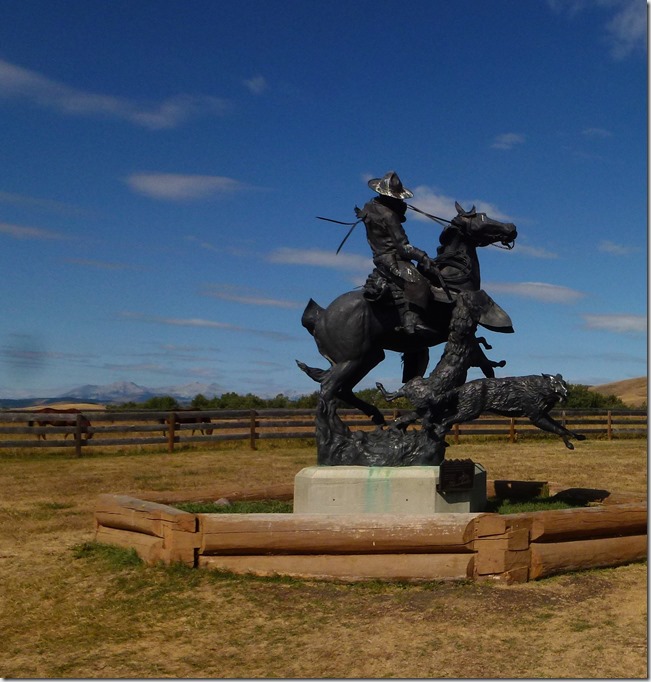 The above photo depicts George Lane, a bigger than life character, fighting off wolves while working on the Bar U – a ranch he purchased in 1902. Lane is best remembered as one of the “Big Four” – ranchers who underwrote the first Calgary Stampede in 1912. Lane was also known for his world-renowned Percheron horses. In October of 1909, Bar U Percherons won almost every event they entered in the Seattle World’s Fair.

The Bar U sits square in a space and time when Alberta becoming part of Canada was not a done deal. With the long-promised completion of national railroad spanning the breadth of our huge country, the incentives provided by the surveying and parceling out of prairie land and a good deal of PR, southern Alberta was settled and the United States was kept from land grabbing a huge swath of the Canadian prairie.

The above quote caught my eye. In and out of the saddle for sixteen hour days, sleeping rough for untold nights with nothing but a bedroll to keep out the elements – not an easy life.

I was interested to visit this national historic site for a couple of reasons. Canada 150 Celebrations mean all our national parks are free of charge. Always a nice perk. I have become interested in the history of this area since my daughter and her family relocated here last year. Over the summer, I listened to a CBC podcast entitled: Heroes, Hustlers and Horsemen – history like you haven’t heard it before. These are whiskey-soaked, rough and tumble biographies about larger than life figures who shaped southern Alberta in the tumultuous late 1800s. 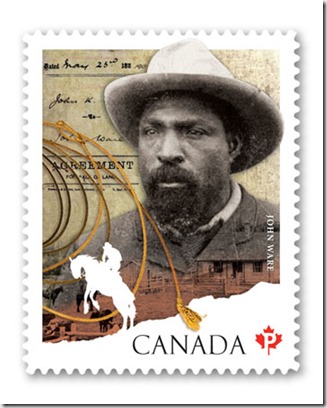 The last podcast in the series covered the life of John Ware, a former American slave who became a legendary cowboy and rancher in southern Alberta. His story was quite fascinating and mentions his time at the Bar U. In 1882, Tom Lynch, Bar U Ranch veteran cattle drover, hired on a few hands from Texas to help bring a large herd of cattle seven hundred miles up from Montana to Southern Alberta. John Ware was one of those Texans. In a rough world, Ware established himself with deeds rather than words. A man of legendary courage and strength, a skilled horseman with a straight forward honesty, he gained the respect of most everyone he met.

Do check out the podcast on John Ware and listen to the whole Heroes, Hustlers and Horsemen series.

I thoroughly enjoyed my trip to this National Historic Site. Canada has so much to offer to citizens and travellers alike. Have you visited any of our National Parks for the Canada 150 Celebrations? There’s still time. Go for it.