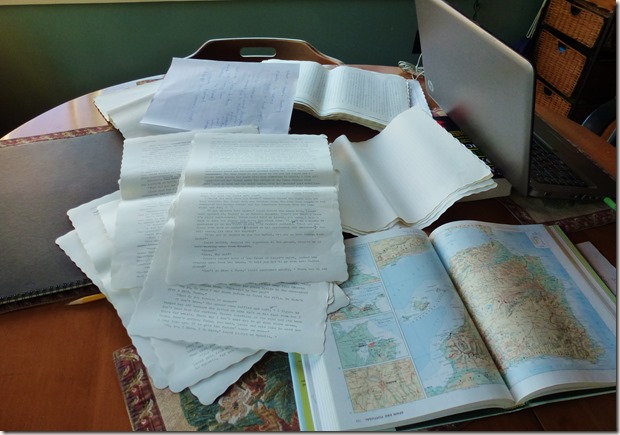 Over the last five days, I have been utterly possessed by what could become a significant work-in-progress. Some of you, who have been following my blog for a while, will remember that I wrote a post about my mother being a writer. For years, as I was growing up, my mother was writing a book. My father worked the night shift at a lumber mill, and night after  night we kids would be lulled to sleep by the clacking of my mom’s old Remington typewriter, complete with the ding of the bell to indicate she had come to the end of a line and then the crank-swish of the carriage return.

As I got older and curious about this book, my mom would dole out little bits and pieces of the story like Scheherazade in the Arabian Nights. The characters and the plot wove its way into my being, in much the same way that I’m sure it was a part of hers. After going through the process of creating two novels, I certainly understand the urge my mom had to talk about her writing.

Over the years of her life, my mom continued to write but the unfinished book seemed to take a back seat to other projects. After I moved away from home I don’t remember ever seeing it or hearing her talk about it. 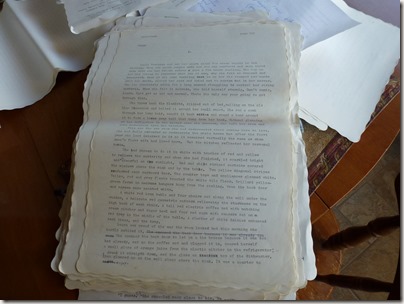 Like a lightening bolt from the past, a part of my mother’s original manuscript has resurfaced. It was in a box of things she had left to my son. This manuscript is double-spaced and typewritten on white paper placemats – the kind they put on the table at a restaurant. The pages are nine and half by fourteen inches in size with pretty fluted edges. (My mom worked on and off as a waitress. I guess she got a deal on cheap paper.) It starts at page eighty-six and ends on page one hundred and ninety – approximately forty thousand words. And even at that length, this is only a fraction of the box of these typewritten placemats that I remember from my childhood. It appears my mother was every bit as wordy as I am.

Five days ago, I thought – what the heck – I’ll start typing what I have of this story into my computer. It was as if I had opened a door and walked right into my own childhood, even the smell of the paper evokes so many memories. As soon as I began to type, I began to revise. Hold it, I told myself. What was happening? Before I knew it, I had abandoned any hope of transcribing and was rushing through the long sheets of paper, reading, taking copious notes, trying to understand where she might have started the story and then where she might have been going with it. My memories of what she used to read and share with me are almost always from the beginning of the book. I confess to never having a clue how the damn thing was supposed to end.

As I listened to the character’s voices, they sunk their hooks into me. It’s as if, now that they have been discovered, they are demanding that their stories be told. Somewhat melodramatic, I know – but the story leans in that direction. I am gleaning every piece of information I can from what I have left of my mom’s writing. From that, I am creating character and setting profiles. At the same time, I’m writing the back story – something that may have come in the first eighty-six pages because it sure isn’t in the next one hundred or so.

How can I describe what working on this story means to me? It’s as if my mother, who has been gone now for over sixteen years, is standing right behind me. I can almost feel her lean in close; I can sense her smiling as I go in the right direction and then frowning if I veer off down the wrong path.

A thought occurred to me, late last night as I hunched over the laptop typing away at breakneck speed. What if the rest of the book is ever found? I am swiftly approaching a point where my mother’s story will have become so welded to my own imagination and writing process that I certainly won’t need the rest of her manuscript to write this book. If the remainder of the original work were found, I would read it out of curiosity. It would be fascinating to see if her unseen hand, or my own buried memories, would have guided me along the exact same plot twists and turns that she took. Or, perhaps, I would learn that I had gone in a totally different direction.

I sense that some people close to me (Bruce, are you reading this blog – hahaha) may think I’m a bit nuts for immersing myself in this project, but I’m hooked and that’s that. I am also feeling remiss for all the excellent blog posts I’m passing up these days, to say nothing of summer’s last hurrah. I’ve hardly gone outside or into social media since this project grabbed a hold of me. But writers must write and stories must be told. When a golden opportunity falls right into my hands, I know what to do with it. I’ve also discovered that I can work on writing one book (albeit a decidedly different kind of book) and edit another book, simultaneously. A discovery like that is worth a lot.

Has anyone else ever had an experience similar to the one I’m describing? Weigh in with your thoughts one way or the other. I’d love to have the input. 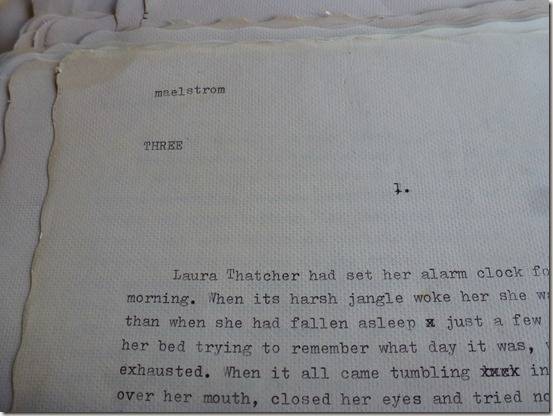