I have finally been nominated for one of those chain letter type blogger awards. Like many of you who boast these cute badges on the home page of your blog, I was thrilled. (thanks Blue88 )  I need to tell you seven interesting things about myself and nominate ten bloggers of my own choosing to receive this award. Then, I too can display that cute little badge.

Hmmmm . . . I don’t see myself as particularly interesting, so I’ll have to give this some thought. Here goes, in random order, seven (semi?) interesting things about me.

I was privileged to be in the delivery room for the birth of both my granddaughters (Emma and Britney) and these two experiences were absolutely phenomenal. My daughter was like some kind of force of nature giving birth to those kids – she did all the work and I had all the fun! What comes around goes around. It was my turn to enjoy myself. 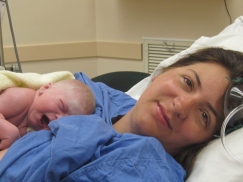 On one of my annual week-long visits to Ottawa to see my son and his lovely wife, he and I watched the entire DVD boxed set of The Shield – all seven seasons. I 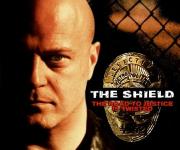 don’t think we had more than a few moments of fresh air the entire week – but it was January in Ottawa so no big loss on that front. During the first couple of seasons, I tried valiantly to defend MacKay’s behaviour (the dirty-cop-main-character), but my son just kept shaking his head and telling me, “Stop drinking the MacKay Kool-Aid, Mom.” And no matter how hard I tried, I couldn’t get another one of the character’s name right – Aceaveda. I kept calling him Mesa Verde – Bruce and I had been down to Colorado and visited the ruins at Mesa Verde and the name really stuck in my mind.

All of my life I have had a fear of chickens. Not the Kentucky fried kind – the live running around and clucking kind. When I was two, my dad took my mom to the hospital to have my little brother and my older brother and I were dropped off at the house of a woman who had chickens. I remember both my brother and I had new yo-yos. That memory does cause me to wonder why on earth my mom would have given yo-yos to two children whose combined ages hardly reached five. It was a different era. Anyway, this woman told us to stay outside and play or she would take away our yo-yos. While outside her chickens chased me all over the yard and pecked at my hands and legs. Not the nicest childhood memory, but this is the dark and twisted stuff that we writers are made of.

The first time I ever became inebriated, I was fifteen years old. Two girlfriends and I crouched in the bushes behind the high school and polished

off a mickey of lemon gin before going into a school dance. Someone had the brilliant idea that lemon gin would be a good choice because it didn’t need any mixer. After all, hiding out in the bushes we knew we didn’t have access to all the accruements of a well-stocked bar. Suffice to say that the dance was a disaster. I spent most of the night in the washroom throwing up and I cannot stomach the smell of any type of gin to this day.

One day, many years ago, when we had far less money than we do today and a new truck was something from a fantasy dreamland – Bruce and I had to drive 60 kilometers in the pouring rain with the windows down and a rope tied to the non-working windshield wipers of our old Mazda pickup. I would lean out the passenger window and pull the rope from my side of the truck and then Bruce would reach out and pull from his side. Thank goodness we were on our way there to get the bloody wipers fixed. (That isn’t a picture of our truck – but you get the idea – right?) 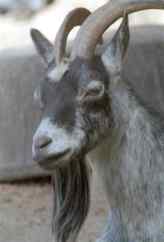 Even though I have lived for years in an area where bears wander freely and cougar sightings are not unusual, the only scary animal encounter I’ve ever had occurred between myself and a Billy goat. Our neighbours kept goats and when they moved they had to make two trips to take them away. They didn’t have a trail like ours, so they walked the first batch over to our place and up to the waiting trailer. They said they would come back for the Billy goat. I guess he got sort of pissed off being left on his own, because he broke out of his pen and followed the smell of his female friends over to our place. At that time we had a sliding glass door that opened out to our deck. I happened to glance out that glass door and saw this goat with his front legs up in the apple tree and his mouth going a mile a minute. From my vantage point inside the cabin, he looked more a nuisance than anything else. I grabbed my broom and rushed out on the deck to chase him away – big mistake. He took one look at me, slammed down onto all four of his goat hooves and charged. I barely made it back inside the cabin, frantically pulling the heavy glass door shut behind me. That goat charged those glass doors at least four times with his horns down, blowing steam out of his nostrils. It felt like the whole cabin was shaking by the time he gave it up. I guess the moral of that story is that hell hath no fury like a Billy goat who has lost his harem.

I’m on my second marriage which I’m pretty sure will be my last marriage as two husbands in any woman’s life is more than enough. Don’t get

me wrong, I’m not complaining. I’m just saying . . . reminds me of a sign I saw when we were travelling down in California recently. It was in the little beach town of Avila at a bakery that sold the best fudge ever. “A woman looking for a husband has never had one.” So, there you have it.

And now for the list of my ten nominees. I’ve followed some of these blogs for a while now and some are new discoveries. All are worth checking out.  (These are in no particular order and I apologize in advance if I have been so remiss as to nominate anyone who has already won this particular award or if my nomination strikes you as a big pain in the butt):

Top of the Slush Pile

Giving up the Ghost